The deity is modelled, seated in a posture known as pensive pose  (Maitreya) with the right leg crossed in half lotus position and the left hand elegantly resting on top of the left. Her hair is styled in a high bun, two braids falling from both sides and Adorned with elaborate beaded jewellery and a foliate crown accommodating the Amitabha. Wearing gossamer garment fallen in folds around the body and with a long shawl that wraps around the body and drapes over the arms. The layered dhoti is embellished with further beaded chains. There are traces of gold and red lacquer remaining. 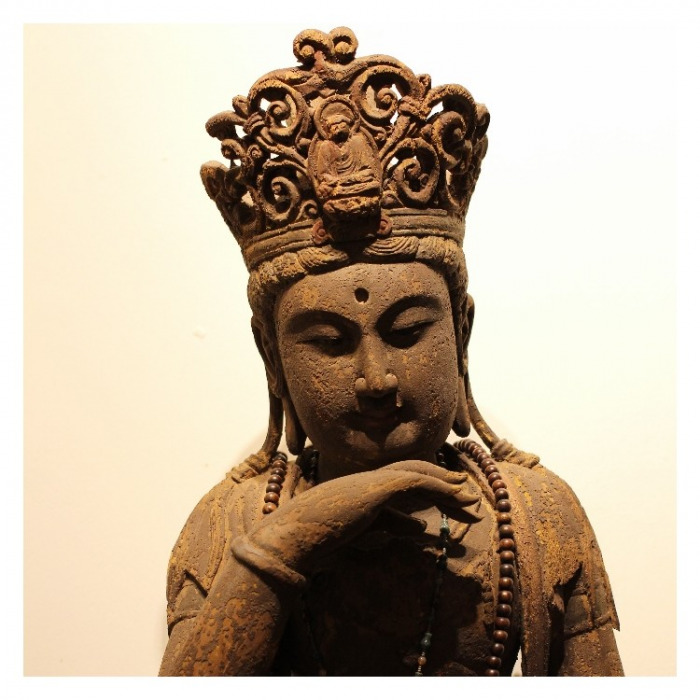 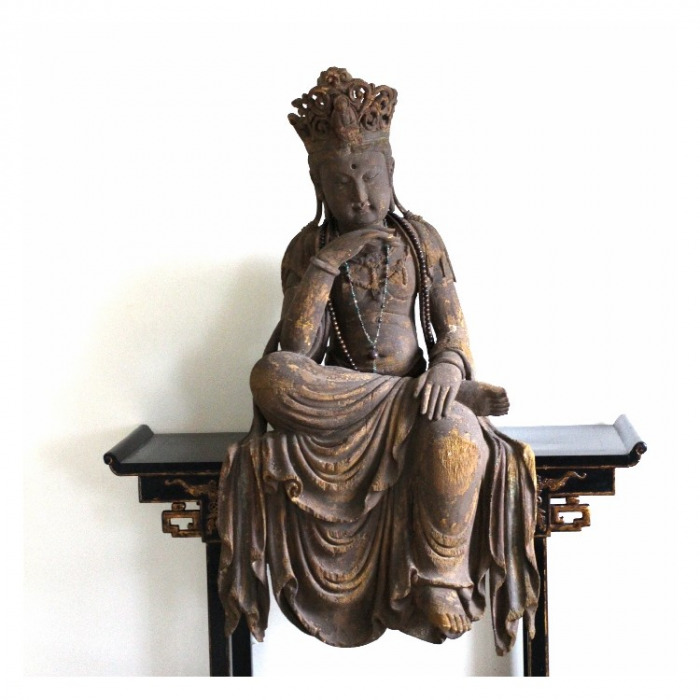 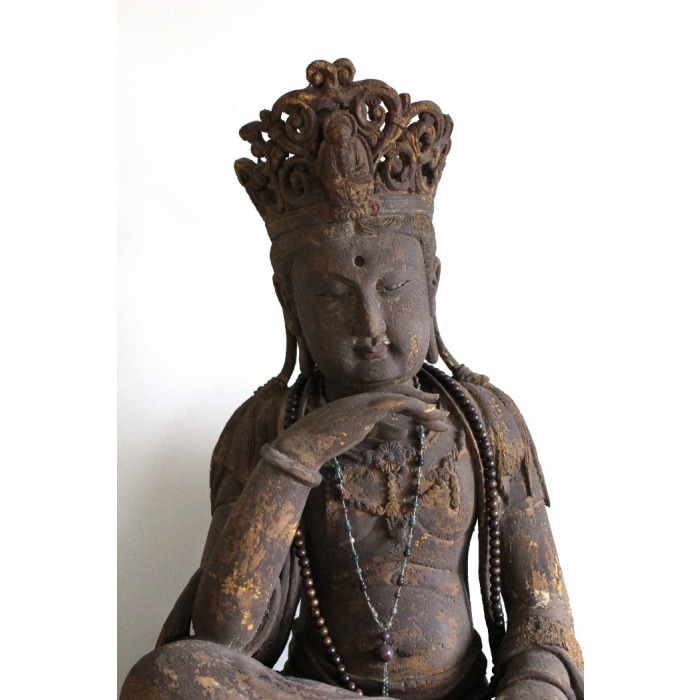 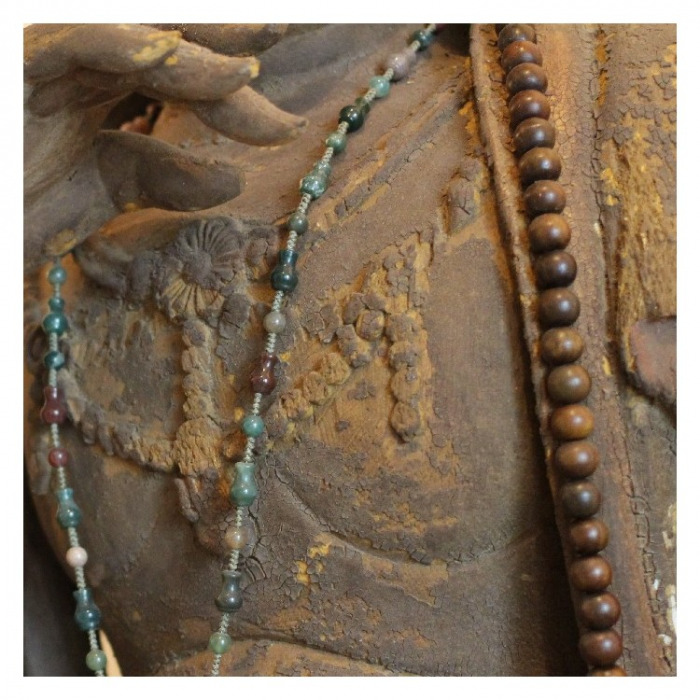 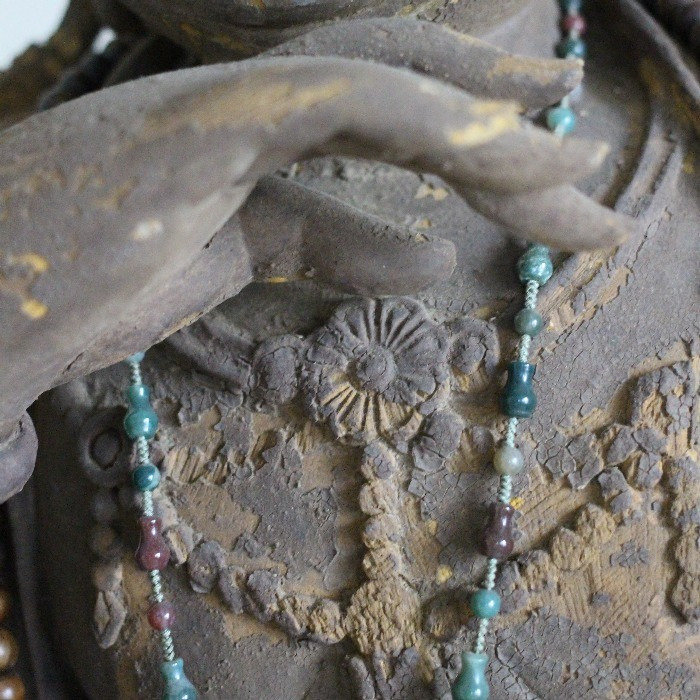 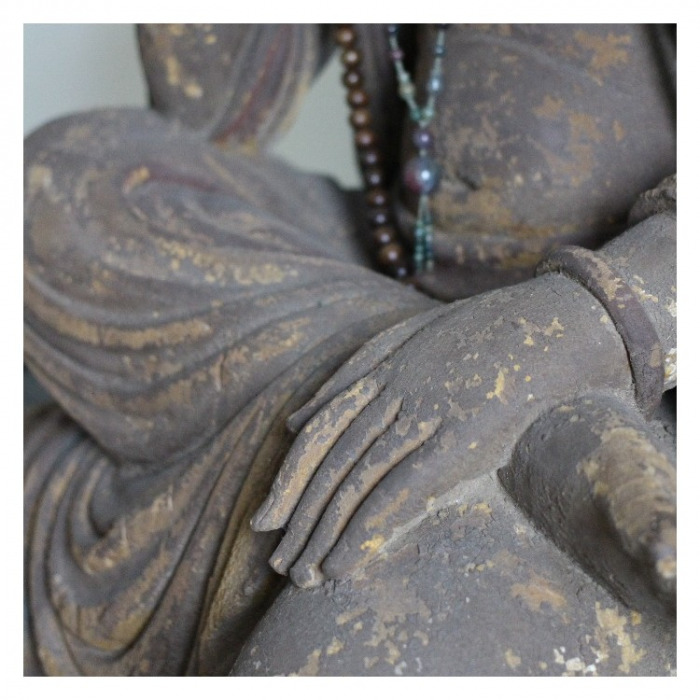 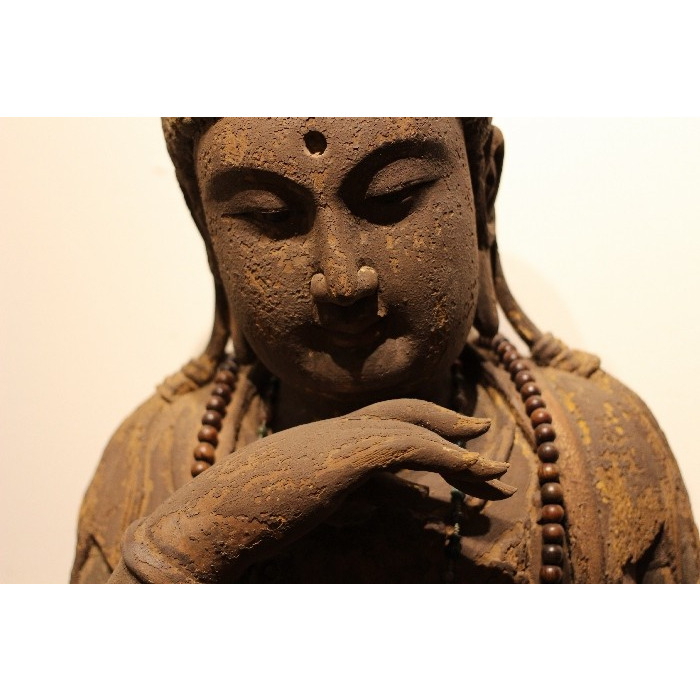 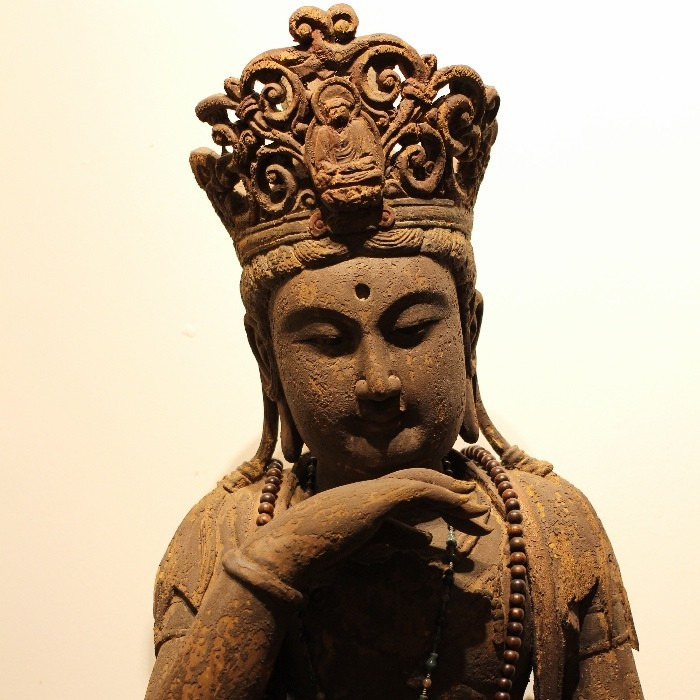 About This Sculpture
This wooden sculpture depicts the Buddhist figure Guanyin, an enlightened being called a bodhisattva.
Bodhisattvas sacrifficed entering paradise in order to help mortals attain enlightenment. A tiny sculpture of the Amitabha Buddha—the Buddha of the Western Paradise—in the figure’s headdress identifies it as Guanyin. In a Buddhist temple, a sculpture like this one often sits to the side of a central sculpture of Buddha, usually with another bodhisattva flanking the other side.
Guanyin, the most beloved bodhisattva in China, is the embodiment of compassion. Guanyin can appear in many different forms, taking whichever one a devotee might especially need at the moment: male or female, gentle or wrathful, rich or poor. Local tales about the enlightened being inspired imaginative figures such as Water-Moon Guanyin, White-Robed Guanyin, Child-Giving Guanyin, Fish Basket Guanyin, and Thousand-Armed and Thousand-Eyed Guanyin.
This sculpture portrays the “Guanyin seated on a rocky cliff overlooking the sea in a posture known as “pensive pose” ( Maitreya ) One leg hangs down while the other is crossed, the left arm elegantly supporting the left leg. The full-moon face, downcast eyes, perfectly arched eyebrows, delicate nose, and small mouth reflect a sense of calm and elegance. A long scarf drapes over the shoulders, and intricate jewelry, including a headdress, necklaces, and arm bracelets, decorates the figure. The hole in the forehead, which once held a precious jewel, symbolizes Guanyin’s ray of light that illuminates the world. Traces of pigment and gold leaf testify.
This sculpture of a bodhisattva, or enlightened being, probably represents the Buddha of the Future, ‘Maitreya’ waiting to be reborn into the world as a Buddha. Maitreya waits in heaven meditating beneath a Dragon Tree, which Chinese sculptors typically interpreted to be a ginkgo.