The waisted case of Violin form, with tortoise shell and fine foliate brass inlay, surmounted by a figure of Hebe and the egale of Zeus. The door with the shepard Daphnis assending and holding a key,  embellishments with bronze foliate ormolu and C-scrolled mounts to the sides, and bracket, on scrolled foliate feet. The circular ormolu dial, with individual white enamel Roman cartouche chapters and Arabic 5 min chapters,  original cut steel hands, signed ‘ HENARD A PARIS’ on the centre enamel plaque, the movement with rectangular plates joined by vase shaped back-pinned pillars, with twin barrel and verge escapement with silk suspension, with calibrated count wheels and strike on bell above, the back plate signed ‘HENARD A PARIS’ with door key, winding key.

Jean-François Hénard was received as Master clockmaker in 1736 and was establishes as HENARD A PARIS at rue Froide manteau 1748 – 1772. 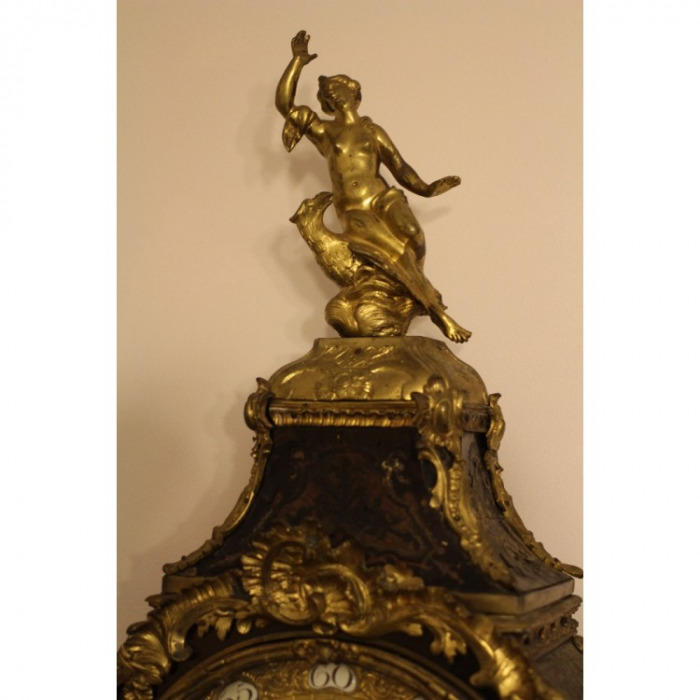 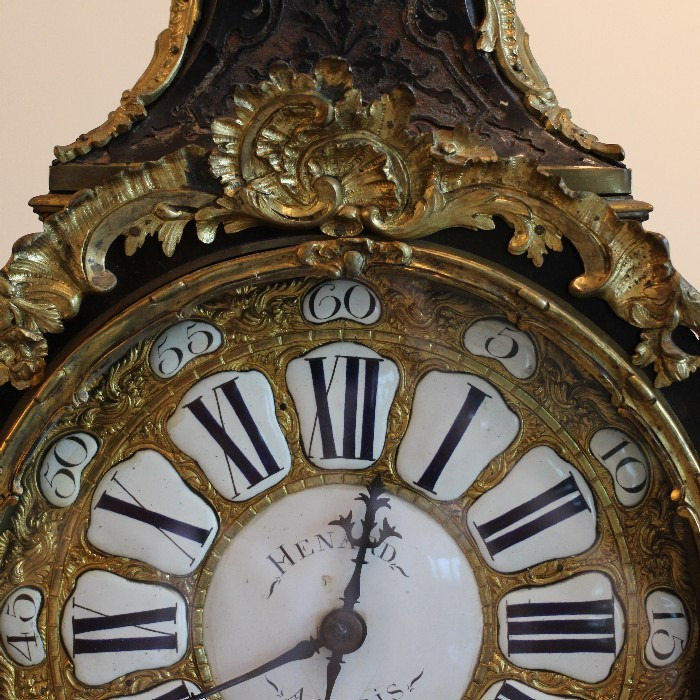 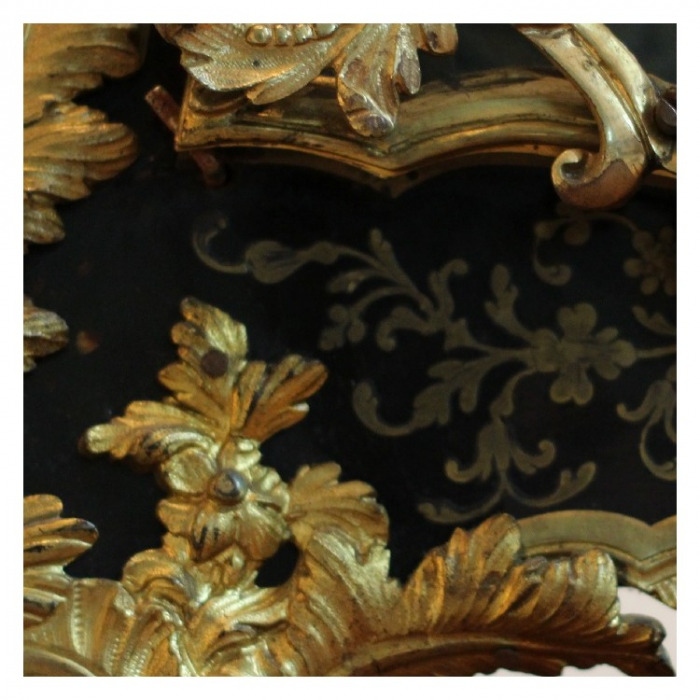 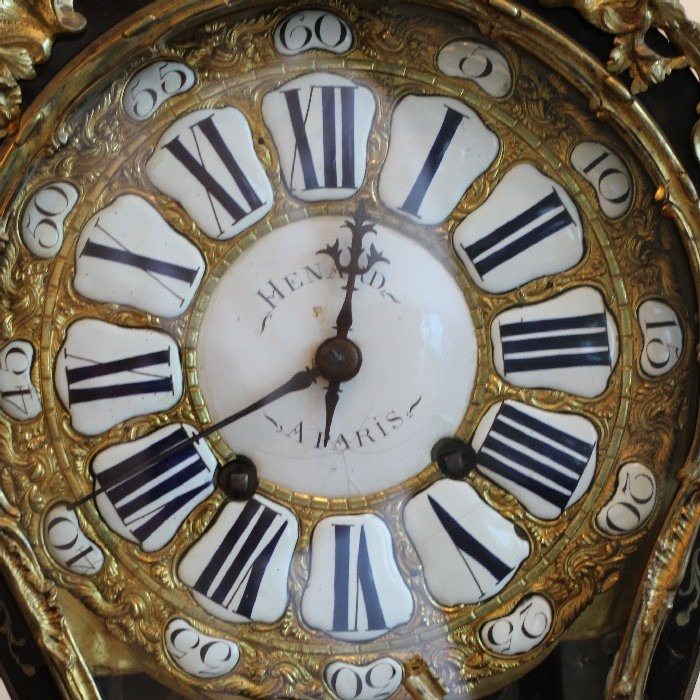 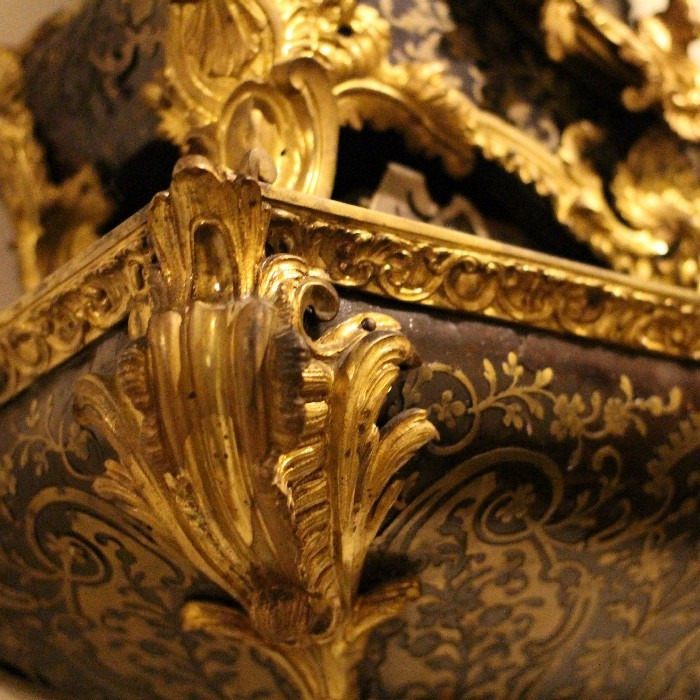 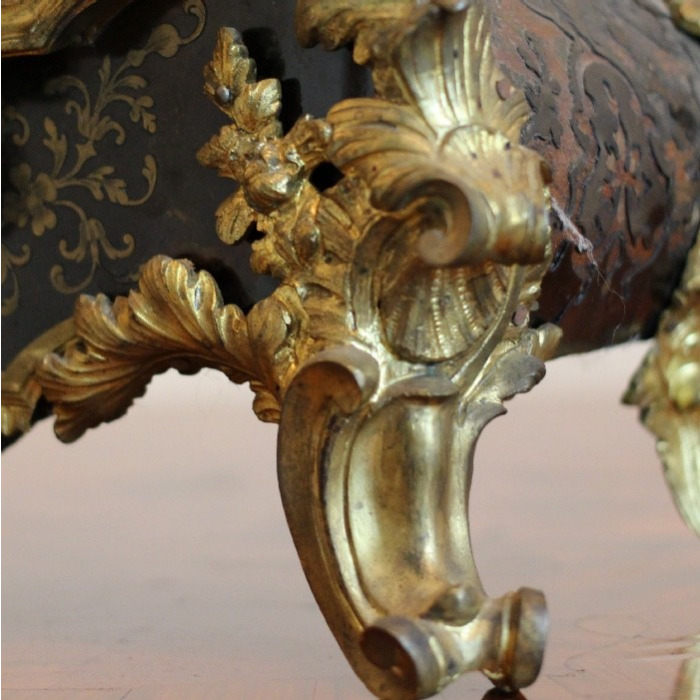 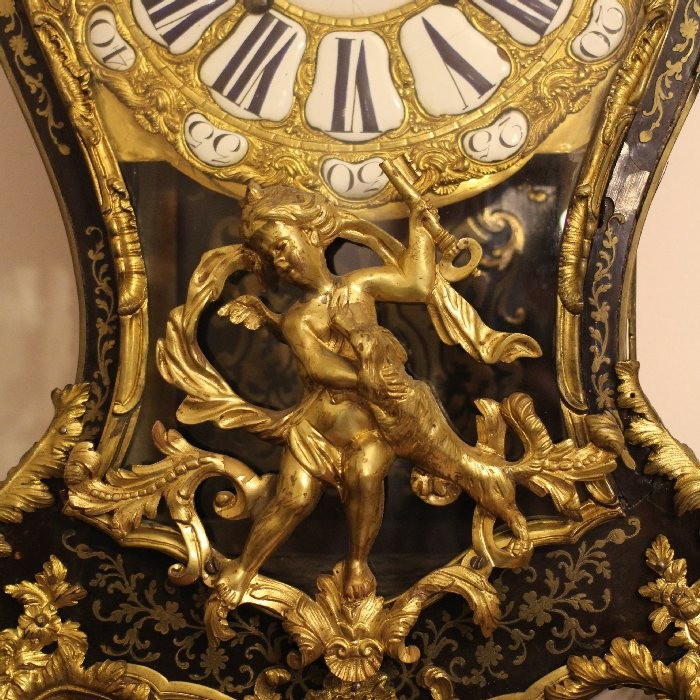 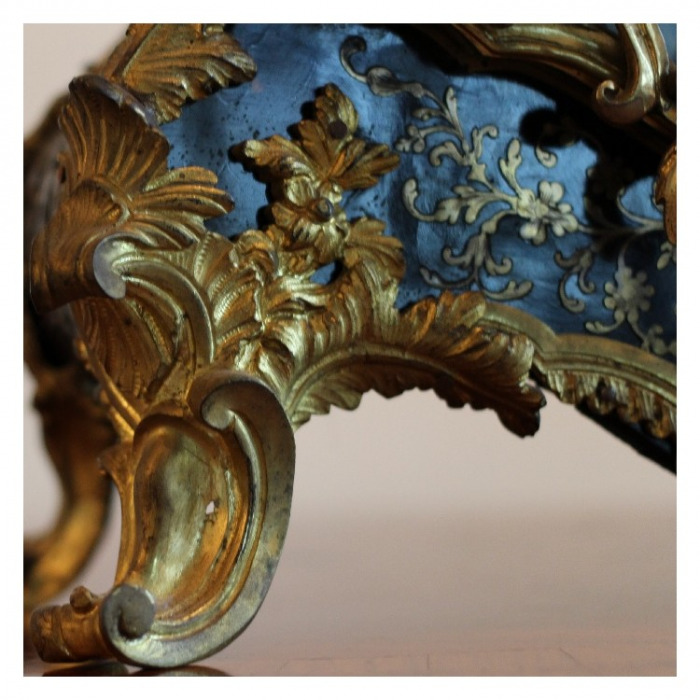 In Greek mythology, Hebe is the goddess of youth (Roman equivalent: Juventas). She is the daughter of Zeus and Hera. Hebe Was the cupbearer for the gods and goddesses of Mount Olympus, serving nectar and ambrosia Their distribution, until she WAS married to Heracles (Roman equivalent: Hercules). Her successor WAS Zeus ‘s lover Ganymede. Another title of hers, for this reason, is Ganymeda. She drew baths for Ares aussi and Helped Hera enter her chariot.
In Euripides ‘play Heracleidae Hebe Granted Iolaus’ wish to Become young again in order to fight Eurystheus. Hebe HAD two children with Heracles: Alexiares and Anicetus.
The name Hebe comes from Greek word meaning “youth” or “prime of life”. Likewise Juventas means “youth”. In art, Hebe is Usually Depicted wearing a sleeveless dress. Hebe WAS aussi worshiped as a goddess of pardons or forgiveness, freed prisoners Would hang Their chains in the sacred grove of her sanctuary at Phlius.

In Greek mythology, Daphnis was a Sicilian shepherd who was said to be the inventor of pastoral poetry.  According to tradition, he was the son of Hermes and a nymph, despite which Daphnis himself was mortal. Daphnis is also described and shown as an eromenos. His mother was said to have exposed him under a laurel tree, where he was found by shepherds and named after the tree under which he was found. He was also sometimes said to be Hermes favourite or beloved rather than his son.

A naiad (possibly Echenais or Nomia) was in love with him and promised to be faithful to him. However, he was seduced, with the aid of wine, by the daughter of a king, and, in revenge, this nymph either blinded him or turned him to stone. Pan also fell in love with him and taught him to play the pan pipes.

Daphnis was also the name of a member of the group of Prophetic sisters, known as the Thriae.

Longus’s legend of Daphnis and Chloe describes two children who grow up together and gradually develop mutual love, eventually marrying after many adventures.

THE EAGLE OF ZEUS

AETOS DIOS Was a giant, golden eagle All which served as Zeus’ personal messenger and animal companion. According To Some, the eagle WAS ounce mortal king named Periphas, Whose virtuous rule was so Celebrated cam That He Was Honoured to be like a god. Zeus, in anger, Would Have smote him with a thunderbolt, goal Apollo intervened and, transforming the king into an eagle, set him beside the throne of Zeus. In other accounts, Zeus ADOPTED as the eagle His first bird When It Appeared to him before the Titan War as a sign of Good omen. The eagle WAS later felt by Zeus to carry the handsome youth Ganymede up to heaven to Become the cupbearer of the gods.

The bird received a place Amongst the stars as the constellation Aquila. Its consort was Lyra, the heavenly vulture.