The waisted case and console in première partie Boulle marquetry with foliate scrolls and strapwork, the ormolu dial with white enamel cartouche-form Roman hour chapters, within a shaped case, framed with foliate c-scrolls and surmoutned by a tapering pedestal issuing a rocaille, foliate and floral spray, the clock raised on scrolled feet on a tapering similarly styled bracket, with pierced leaf foliate-cast ormolu, the angles mounted with pierced foliate espagnolettes. 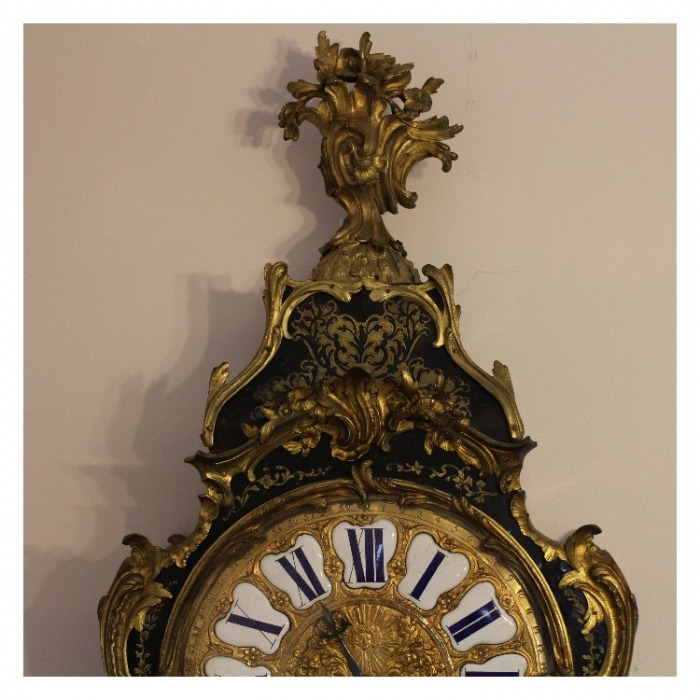 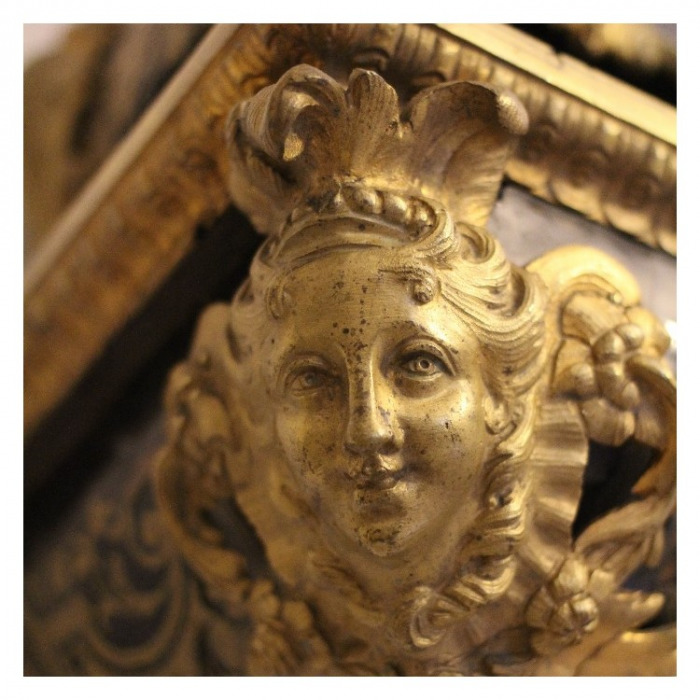 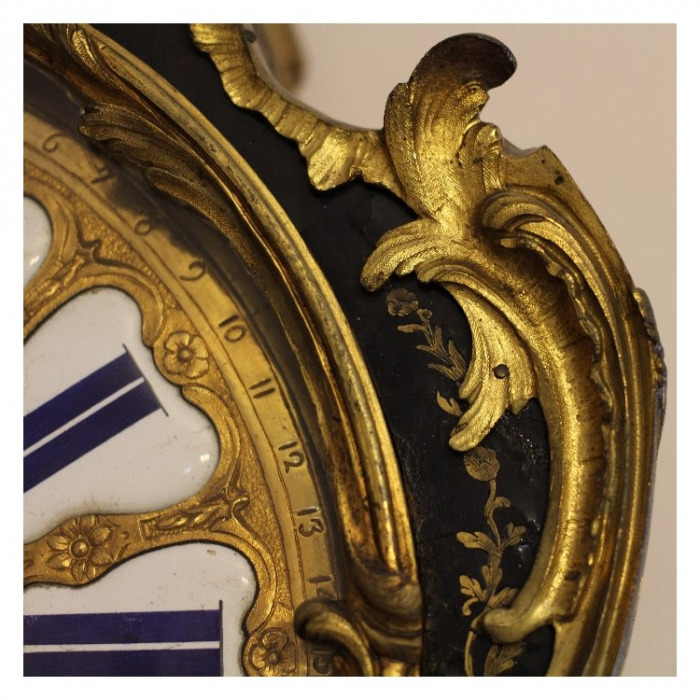 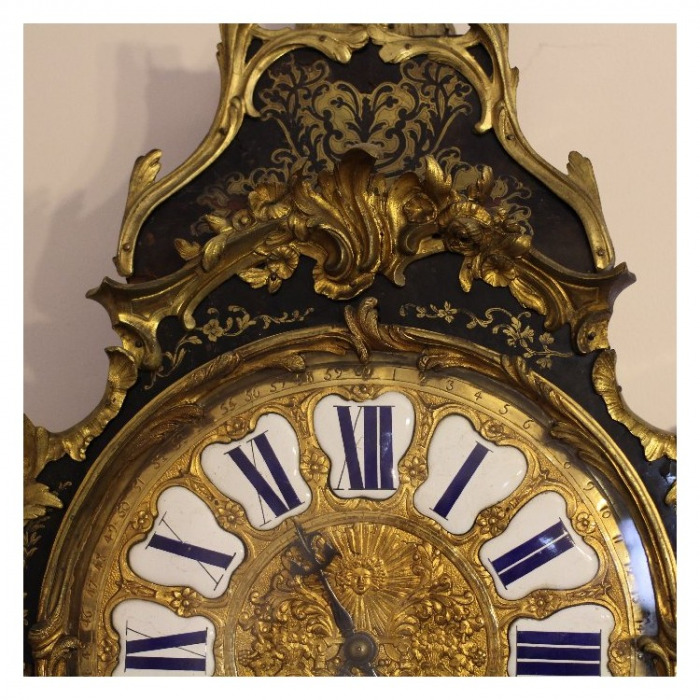 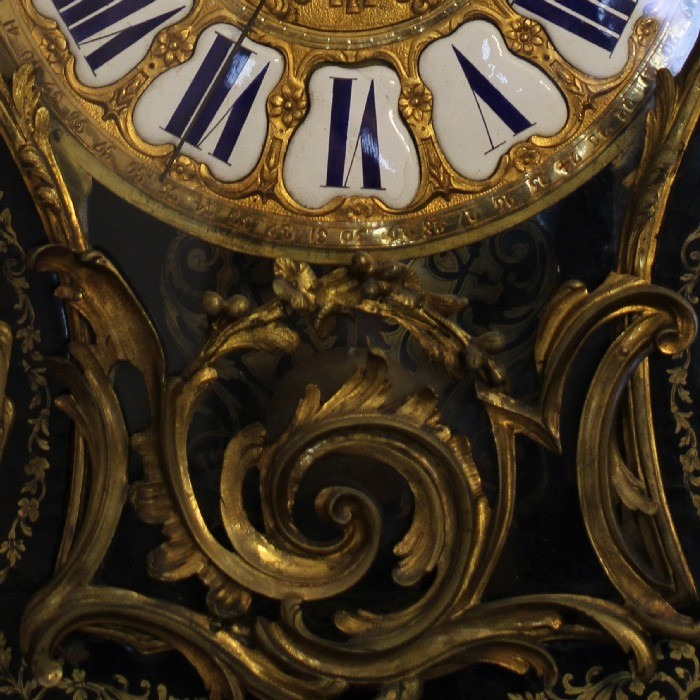 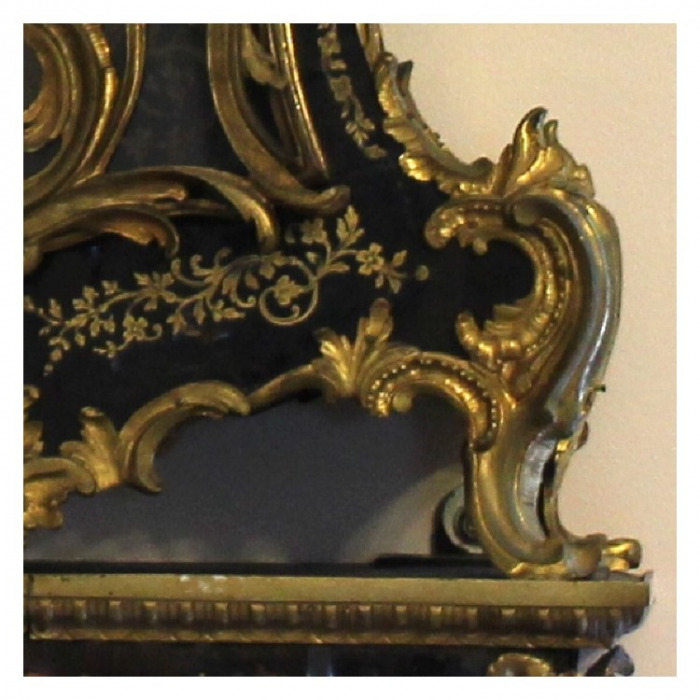 Antoine Cronier (b. 1732 d. after 1806), who nearly always signed his dials Cronier or Cronier à Paris. Born in Paris on 13th January 1732, he was the son of Françoise née Boulard and Charles Cronier, a maître-menuisier. In 1745 Antoine Cronier began an apprenticeship under Nicolas Pierre Thuillier and by 1753 was working independently of a guild, i.e. ouvrier libre but was received as a Parisian maître-horloger in 1763.  From 1759 Cronier was established at rue Saint-Honoré, Paris, where he began to produce considerable numbers of fine clocks using cases by some of the leading bronziers including Robert and Jean-Baptiste Osmond as well as Edmé Roy, René François Morlay, Nicolas Bonnet and François Vion. He also used cases made by the ébénistes Jean-Pierre Latz and François Goyer.

Crosnier enjoyed considerable patronage from leading members of society such as the maréchal de Choiseul-Stainville, the marquis de Sainte-Amaranthe, prince Belosselsky-Belozerky, the duc des Deux-Ponts and M. Sollier. Among the many prestigious collections housing examples from his oeuvre are the Musée Nissim-de-Camondo in Paris, Waddesdon Manor, Buckinghamshire, the Residenzmuseum in Munich and the Residenz Bamberg. Other collections include the Palazzo Reale in Turin, the Musées Royaux d’Art et d’Histoire Brussels, the Nationalmuseet Stockholm, the Fine Arts Museum Boston, the Huntington Collection at San Marino, California, Dalmeny House in South Queensferry and Pavlovsk Palace Saint-Petersburg.

From 1759 Crosnier was established at rue Saint-Honoré, Paris, where he began to produce considerable numbers of fine clocks using cases by some of the leading bronziers including Robert and Jean-Baptiste Osmond as well as Edmé Roy, René François Morlay, Nicolas Bonnet and François Vion. He also used cases made by the ébénistes Jean-Pierre Latz and François Goyer. In addition Cronier employed the gilder Honoré Noël and supplied the tapissier Nicolas Leclerc.

Philippe Jacques de Choiseul down from the House of Choiseul, a noble family from Choiseul in the Haute-Marne. This illustrious family Provided a significant number of servants in the kingdom of France, five marshals, a cardinal, two bishops, And Many statesmen. Its origin dates back to the twelfth century.

Jeanne Louise Françoise Desmier Archaic Saint-Simon, born May 16 1751 in Saintes and the guillotine 17 June 1794 Is a salonnière French .

Daughter of Étienne-Louis Desmier Archaic, Marquis de Saint-Simon, the Pailly, Palaïseuil, Great Résie, Pressigny, Tesson born November 16, 1709, died on 17 Floreal Year VI , lieutenant general of the armies of King , Jeanne-Louise-Françoise Desmier Archaic, after youthful escapades, had been forced to marry August 24, 1771 a commoner, the DAVASSE Sieur de Saint-Amarand, son of a Receiver General Finance , which ruined the game, contracted debts and left the family home to live, it seems, in Spain. His wife had remained in Paris penniless with two children but she found a patron in the Prince de Conti. She could spend some time at the hotel Jonchères then she settled in the business district, rue Vivienne, where she had a salon.

She had several affairs with gentlemen including the Vicomte de Pons said that the father of her daughter, then, having met with Mr. Joseph Aucane, trading income settlements where he had been exiled for several years debts too, she took the “Sainte-Amaranth” and transformed his room into gambling house.

The family of Belosselsky-Belozersky claims the descendance directly from the first Russian Princes,[citation needed] from the “Kiev Rus” period and specifically from Prince Rurik (of Swedish roots), who created their seat in Kiev around the years 870–890. The family traces its patrimonic, father-to-son roots throughout the ruling houses of Russia until the mid 16th century, to Yuri Dolgoruky (founder of Moscow) and his grandsons who were grand-dukes/princes of Kiev as well as of Vladimir-Suzdal principality. After the ascendance of Ivan Kalita (“Moneybags”) and the Romanov dynasty, the family were rulers of the Belozersk (White Lake) principality, north of Moscow. Gleb Vassilkovich was the first Belozersky prince to rule there. While on one of the required annual visits to Sarai, the headquarters of the Golden Horde (near today’s Astrakhan), to renew his patent (yarlik) received from the reigning Khan and ruler of the Golden Horde Sartak Khan, allowing thus Gleb to rule and tax his lands for another year. On this visit, Gleb married Feodora, Sartak’s daughter (Feodora Sartakovna) (also granddaughter of the Mongol ruler Batu Khan and great-great-granddaughter of Genghis Khan. Gleb Vassilkovich thus consolidated the power of the dominant Tatar-Mongol rulers and the Belozersky clan. The offspring of Gleb and Feodora Sartakovna, the current Belosselsky-Belozersky family, are thus descendants of Genghis Khan as well as of the founder of Russia, Prince Rurik. Subsequently, the family, after having lost the majority of its men in the historical “watershed” battle for Russia’s independence, the battle of Kulikovo in 1380, against the Tatar-Mongol dominance, the few remaining Belozersky princes slowly lost the control of the lands in the Belo Ozero/Belozersk principality area (White Lake). The family was relegated thereafter to a more minor ruling role over the lands of “Belo Selo” south of Belozersk (Thus the name “Belosselsky” – of White Village) when the Moscow principality led by Moscow Romanovs were slowly taking control over all the former semi-independent principalities of Russia. After a period of lesser prominence, but still providing military and political leaders, it became a major factor in support to Peter the Great’s reforms, in building the Russian navy and providing diplomats and military leaders. In early 1800 Alexander Mikhailovich Belosselsky-Belozersky, due to his significant contributions to Russia in diplomacy, science and culture, was granted the right to bear the double princely name of Belosselsky-Belozersky from Emperor Paul I, in recognition of the Belosselsky branch being the single remaining such branch of the princes having ruled Belo Ozero and being of the Belozersky dynasty.