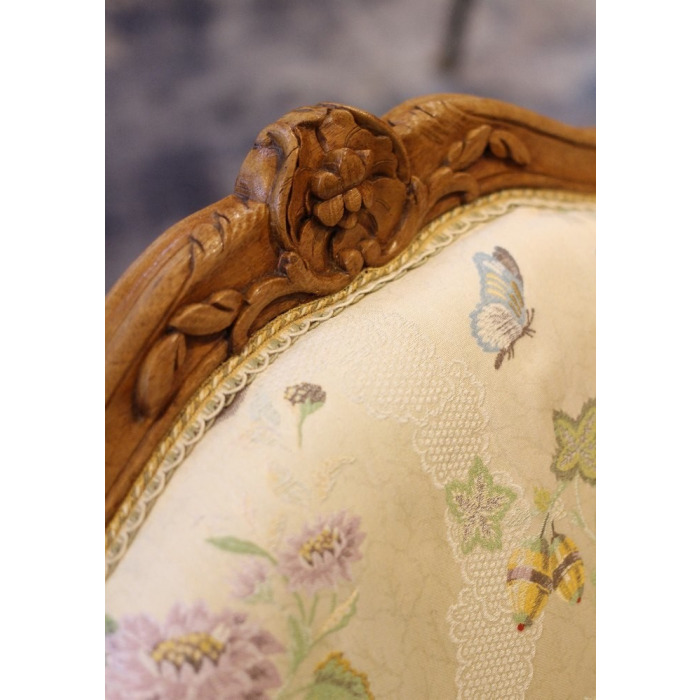 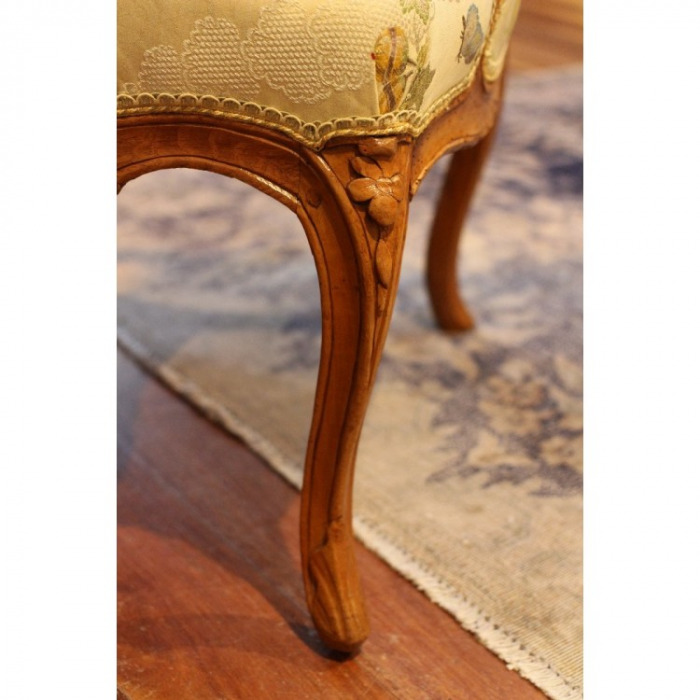 GOURDIN:
An XVIIIth century illustrious family of carpenters, the Gourdin have marked the history of seats, from the Régence to Louis XVI. There was three of them: John, the father, Jean- Baptiste, the eldest son and Michel, his brother, the Gourdin family has always been synonymous with quality. Their seats tell the story of the eighteenth century styles. At the head of three separate workshops, Gourdin had a prestigious clientele and realized the most important commands of the time.

Jean Gourdin (c. 1690-1764): Patriarch of the dynasty, Jean Gourdin was born around 1690, probably in Paris. After gaining his master’s in 1714, he married Marie-Madeleine Collet, herself from a family of carpenters. By this time, Jean Gourdin opened a shop in the Clery street, in the neighborhood of Bonne-Nouvelle, and hired companions and workers. In 1732 he inherited the shop from his father-in law, Jean Collet, which allowed him to develop his workshop and permanently associate his name at 36 rue de Clery. Then he bought the second part of the store to his wife’s family in 1743.
He had four children, two girls. Marie-Anne, the eldest, born in 1719 and married in 1745 with Jean Avisse, renowned carpenter and son of Louis Avisse, the king gardener at Versailles. Marie Anne and Jean Avisse had six children, one son, Claude, who became carpenter in the Faubourg Saint -Honoré. Marie-Madeleine, the youngest of the family, was born in 1741 and married in 1761 Jean- Charles Allard, master upholsterer and dealer in Rue Dauphine.

Jean Baptiste Gourdin (v.1723 – 1781) : Jean-Baptiste was born around 1723. From 1736 to 1741, unlike the craftsmen of the eighteenth century, he did not performed his apprenticeship with a master carpenter, but with a master sculptor named Toussaint Foliot. Thereafter, he returned to work in his father’s workshop from 1741 to 1746. Before completing his training, he was admitted into the community of carpenters in 1747, due to his apprenticeship in his father’s workshop as well as its experience with Toussaint Foliot. He married in 1746 Marie- Françoise Ferret, daughter of master carpenter Claude Ferret. Soon, Jean-Baptiste inherited his father’s in law shop, also located rue de Clery. He opened his own workshop and hired apprentices, before buying the whole house in 1761. He had a daughter, Marie- Françoise Sophie. He ceased its activity in 1776 and died in 1781.

Each member of the Gourdin family was at the head of his own studio and none of the three son took over the father’s shop. However, their family relationships were the basis of the professional network of each of them.
Moreover, it should be noted that Jean -Baptiste considerably developed the workshop of his father- in law, Claude Ferret, inventory indicating no less than 16 benches. In 1771, its stock of wood was as important as a huge workshop such as Tilliard. Jean- Baptiste Gourdin realized indeed many orders throughout his career.

Jean Gourdin received large orders from individuals, but also participated in prestigious projects. Amoung them, an order for the house of the Duchess of Mazarin (rue de Varennes) and the Château d’Asnières, which was purchased in 1750 by the Marquis de Voyer, great military and Marshal of the king Armies, in charge of Her Majesty stud farm. Castles Montgeoffroy (Anjou ) , Thoiry (Yvelines) and Conde ( Brie ) , also have many pieces of Jean Gourdin.

Jean- Baptiste worked for a more eclectic clientele than his father, including many financial customers in Europe. He worked for prestigious clients such as the Marquis de Bellevaux, Claude II Bonnay and very regularly for the Prince de Soubise, Duc de Rohan. But his most famous client was the Dauphine Marie- Antoinette during its move to the court.

Jean produced the most luxurious models. He began his career with the Regency (1715-1730), and developed a richer and more exuberant style during the rocaille (from 1730 to 1745). He reached the peak integrating Rocaille ornaments to Louis XV shapes. Dated to 1740-1750, the seats are well-structured, with large welcoming wood rich sculpture. From 1750-1760, he realized seats Louis XV classic style, with more curved lines and a minimalist decor, composed of florets (especially wild roses), and most of which lay in the game moldings and ribs punctuating the chair. This sobriety, mixed with a perfect harmony of lines, was typical of a desire to return to classicism, characteristic of this time.

Jean- Baptiste, meanwhile, had an extremely prolific production. Early in his career, he was influenced by his father and realized with great mastery chairs regency, Rocaille and Louis XV.

Around 1760-1770, he developed a more personal style by changing floral ornaments in the Transition style, before making Louis XVI styles.

The beginnings of Michel where meanwhile marked by the classic Louis XV style, but the Transition style quickly established himself in his work. He also created many highly refined models, only molded and influenced by the neoclassical breath. In the 1770s, he made very simple and classic Louis XVI chairs.

Dynasty Gourdin has truly crossed styles and dominated the seat market in the eighteenth century, realizing the most important commands of his time. Famous carpenters of the Clery’s street, their seats were sought after by the most prestigious clients. The Gourdin name alone has become the emblem of quality seat of the eighteenth century.