DOYEN was received as Maître Horologer (Master clockmaker) in 1735.

The circular ormolu dial with individual white enamel Roman cartouche chapters, original cut steel gilt hands, the movement with rectangular plates joined by six vase-shaped back-pinned pillars, with two barrels escapement, with calibrated countwheels, the back plate signed “DOYEN A PARIS”, the door with the centaur Nessus carrying Deianira, within an arch shaped case with trellis and foliate trailing inlay throughout, the top with a foliate cabochon, surmounted with the figure of Athena and with trellis and foliate ormolu Sirens to the angles and bracket, on C-scroll feet. 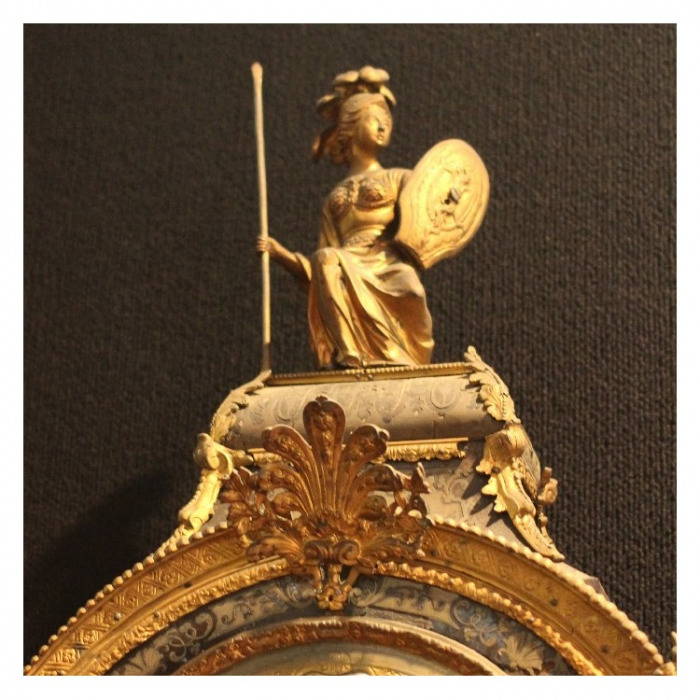 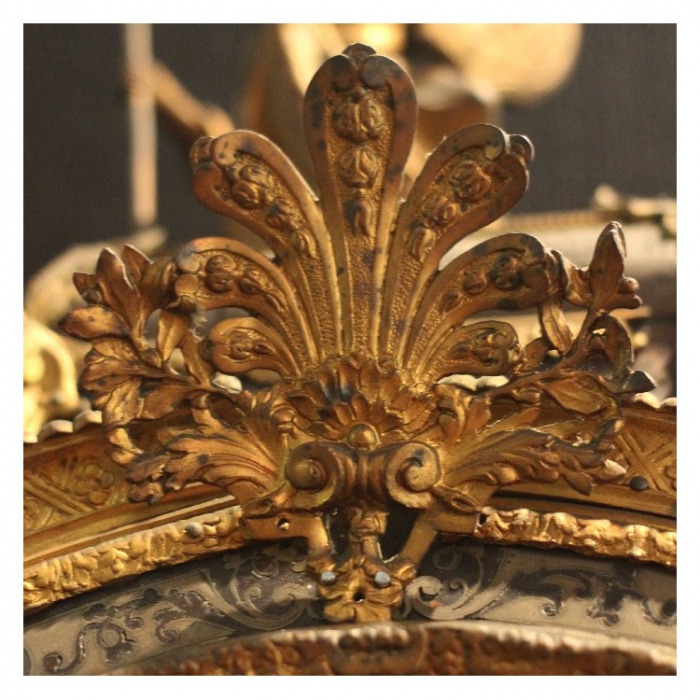 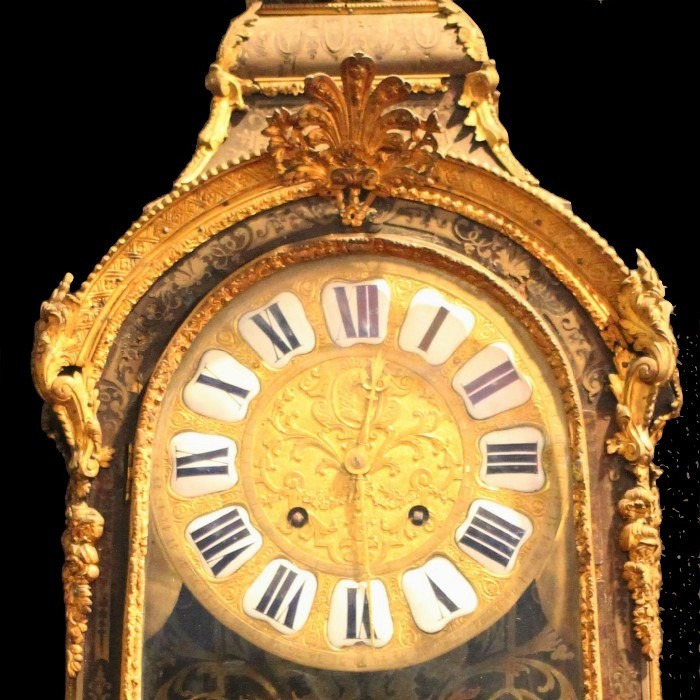 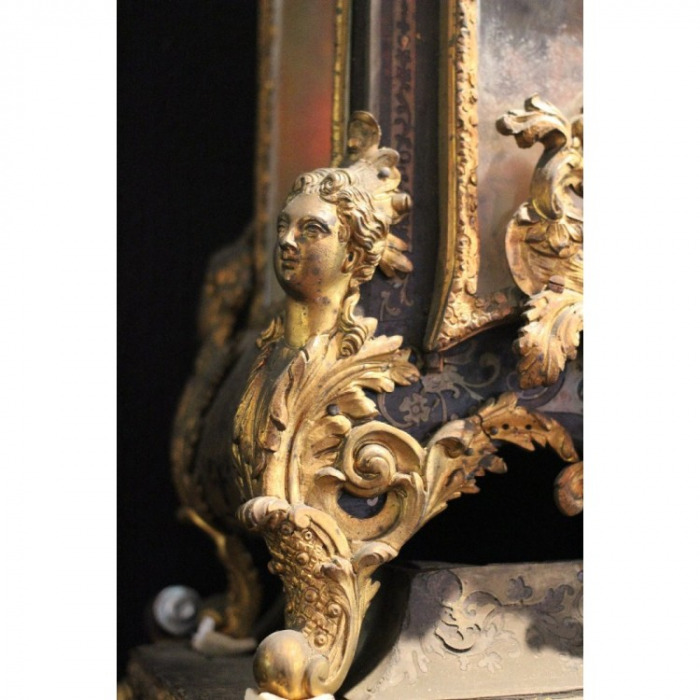 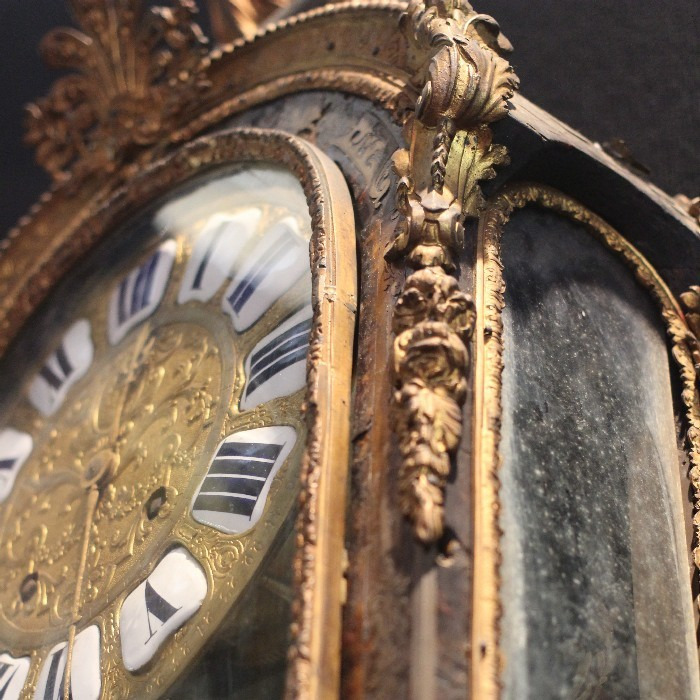 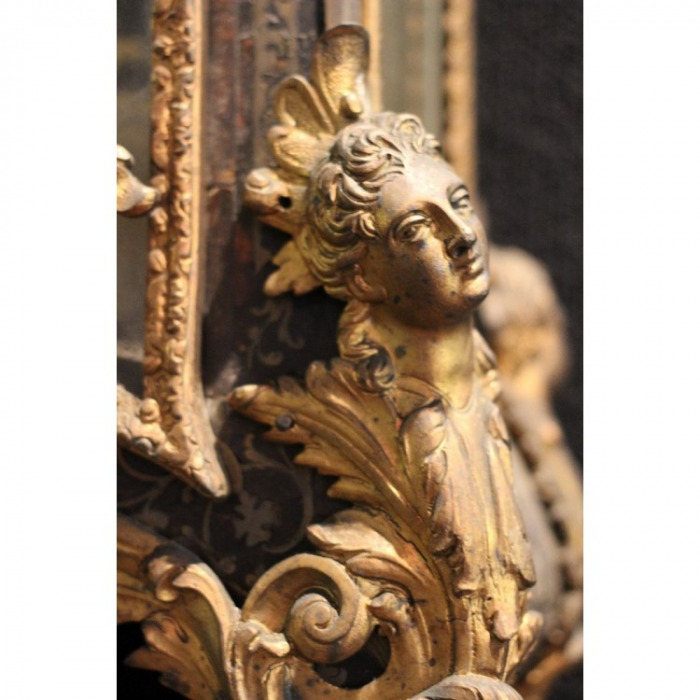 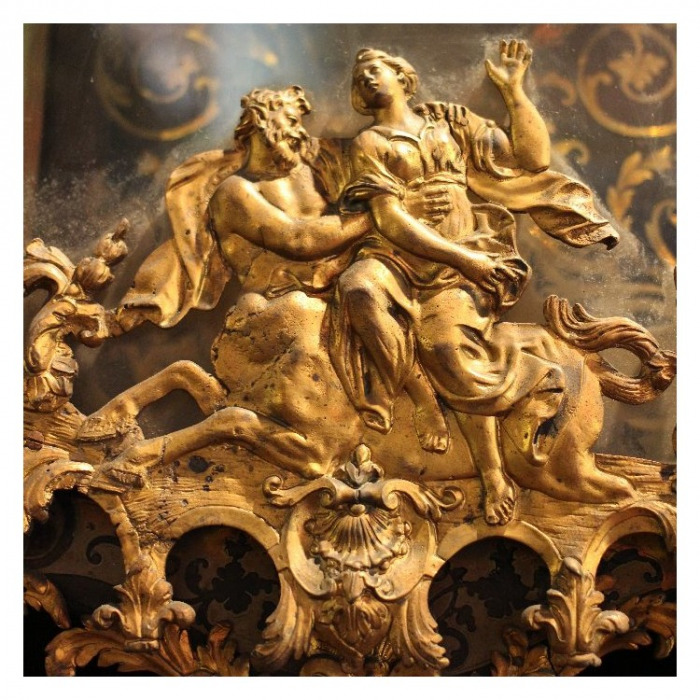 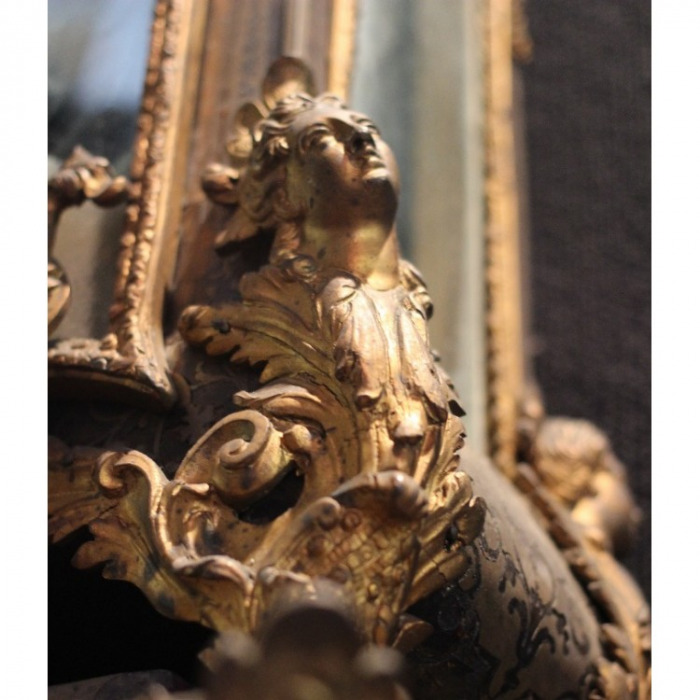 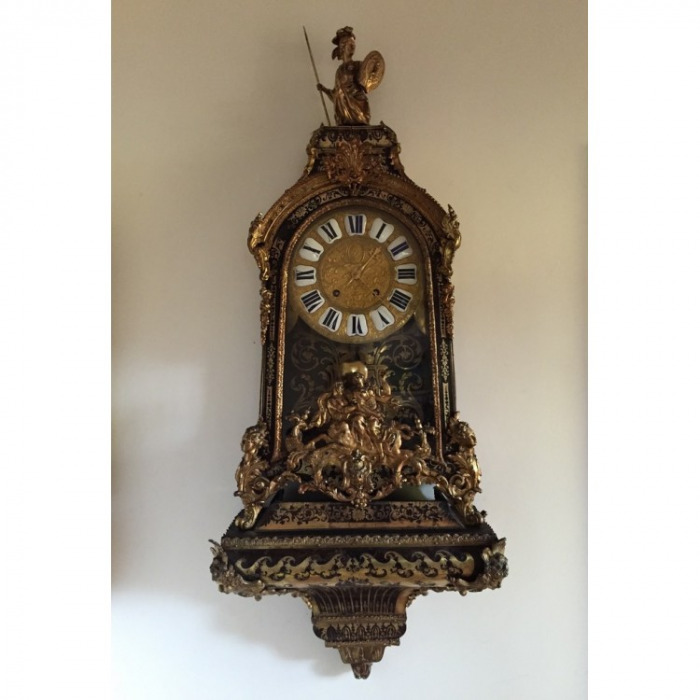 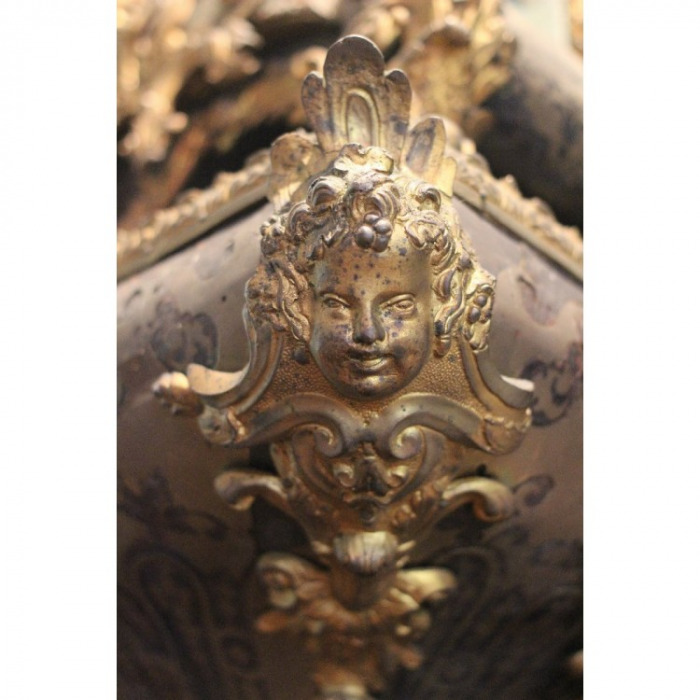 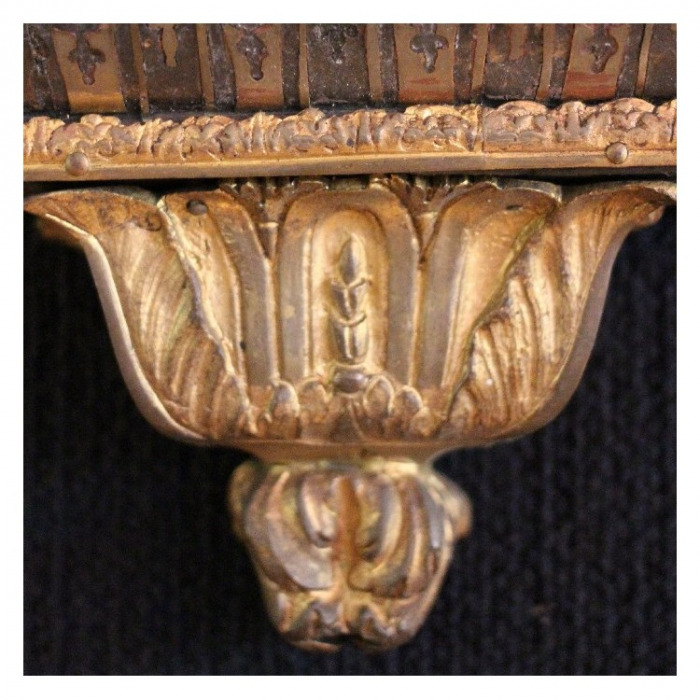 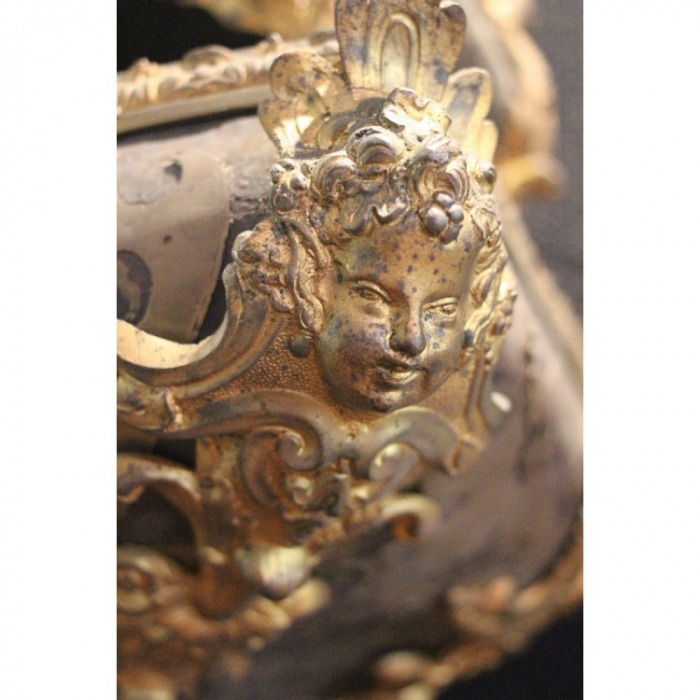 Heracles came to Calydon and fell in love with a woman named Deianira, the daughter of King Oineus. The princess was very beautiful and had many admirers, including the river god Achelous. The two suitors fought a hard battle over the maiden, but Achelous was no match for the mighty son of Zeus. Heracles carried her away, but they soon reached a place in the road that was flooded by a stream. A centaur named Nessus was waiting by the water kindly offering to carry stranded travelers across on his back. Heracles laughed at the prospect of this and chose to swim to the opposite side. Deianira, fully placed her trust in Nessus and promptly climbed aboard for a ride. Finding his passenger to be quite beautiful, the randy centaur turned and tried to flee, but when Heracles heard the frightened cry of the princess aimed and shot her kidnapper with one of his poison arrows.

Before he died, Nessus whispered in Deianira’s ear and told her to take a shirt belonging to Heracles and dip it into his blood. The garment could then be used as a powerful love charm should her husband’s affections ever wane. Deianira did as she was told but decided to keep her actions a secret. When Heracles ended his labors, he was not content to leave things as they were.

He instead went on to seek amends from all those who had wronged him in the past. One man in particular was King Eurytus of Oechalia. For it seems that years earlier the king offered his daughter Iole to anyone who could beat him in a contest of archery. Though Heracles clearly was the winner, the king did not stay true to his word. Heracles returned to Oechalia, slew Eurytus and took Iole away as his concubine. This caused Deianira to become mad with jealousy and she decided it would be a good time to see if Nessus’ secret love charm really worked. Unfortunately she did not know the blood of Nessus had been poisoned when the centaur was pierced by Heracles’ arrow.

Deianira sent Heracles the special cloak, begging him to wear it while making his sacrifices. When the alter flames caused the blood on the garment to warm, Heracles was overwhelmed with burning pain. In agony he tried to rip the clothing from his body but his efforts were of no avail. Any attempt to remove the garment also caused the shredding of his own flesh. Knowing that his death was near, Heracles pulled down two tree trunks and made a funeral pyre. As he climbed on top he begged his companions to ignite the wood lying beneath him. With a burst of thunder, Athena appeared and carried the dying hero off to Olympus. When the flames died down all that remained upon the pyre were the mortal ashes Heracles had inherited from his mother.

His immortal half now lived in the divine palace with his father Zeus and the rest of the gods. When Deianira heard what she had caused her husband’s death she was so overcome with both grief and guilt that she took her own life.